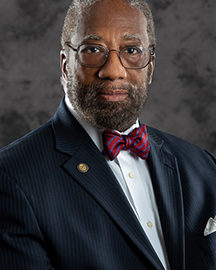 Trustee Ronald Johnson joined Alfred Street Baptist Church 36 years ago in 1981, when worship services were held in the adjacent church with less than five hundred members, creaky balcony and often flooded lower level. Much has changed since then, but one constant remains—a dedicated Church family of Believers who prayerfully desire good church governance.

Trustee Johnson is serving in his 24th year on the Board of Trustees, as secretary, Vice-chairman, and Chairman for nine years. He is currently Chairman of the Board’s Governance Committee, and Chairman of Constitution and Bylaws Committee. He chaired Phase II Church Renovation and Construction, and chaired the Acquisition Committees for the purchase of 325 and 329 South Patrick Street properties. Others include: Member, Senior Choir; President, Male Chorus; President, Membership Group; and ASBC Foundation’s first President.

Trustee Johnson received the BA degree from Virginia State University (VSU) in Political Science, and selected a Danforth Graduate Fellow to the University of Cincinnati where he earned a MA degree in political science and government. He also earned his M. Ed degree in business education from the Xavier University in Cincinnati, further course work at the New School for Social Research of New York and the University of Cincinnati School of Law. In 1991, he was bestowed VSU’s highest award, The Honorary Degree, Doctor of Humane Letters.

As a dedicated public servant for a span of over forty years and staunch advocate of good governance, he served as political appointee during the administration of five Virginia governors (democrats and republicans). Most notably, he was the first African American to serve as Vice–Chairman of the Commonwealth of Virginia Board of Agriculture and Consumer Services, and Co-chaired, with actress and “Prince of Bel Air” sitcom mom Daphne Maxwell Reid, the Governors Foundation for a Drug Free Virginia. Currently, he is serving in his 16th year as appointed Commissioner and Secretary of the Fairfax County Economic Development Authority. In 2017, he was reappointed to a third two-year term to the Federal Communication Commission’s Advisory Committee on Diversity and Digital Empowerment.

In 2009, Johnson served on the Obama-Biden Transition Team as a subject matter expert on diversity in broadband technologies at the US Department of Commerce.

In academia, Johnson served as Rector of VSU Board of Visitors for seven years, where he guided the Board through a period of expanded growth, financial stability and sustained collaboration among campus stakeholders and alumni. Prior to this, Johnson served as President of the VSU Foundation, and guided it through five years of clean audit reports and increased financial growth. He is a former lecturer at Howard University’s Institute for Urban Affairs and Research, and Advisory Board member of the National Institute for Effective Governance. He is actively engaged as supporter and fundraiser for HBCUs initiatives.

In recognition of thirty-five years of service and philanthropy to his alma mater, Johnson was bestowed its highest honors; Honorary Doctor of Humane Letters, Friend of the University, Alumnus of the Year, President’s Vintage Award, President’s Humanitarian Award, Rector’s Exemplary Service Award, Home-coming Parade Marshall, and Sports Hall of Fame.

After a five-year federal service career, and establishing businesses in logistics, and telecommunications, Trustee Johnson is now semi-retired. However, he is frequently sought by organizations to develop and chair innovative panels and events around procurement and hiring best practices as pathways to greater diversity and inclusion in areas of information, communication and technologies (ICT).

His hobbies are bass fishing and cooking.

Trustee Johnson is very thankful and blessed to be a part of the rich and storied history of our church, and to have contributed in some small way to its continued growth and service to its members, and missions throughout the world.