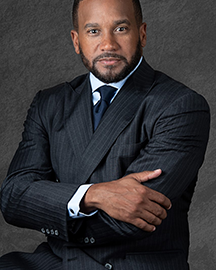 Rev. Dr. Howard-John Wesley is the exciting, gifted and anointed senior pastor of the historicAlfred StreetBaptistChurch (ASBC) in Alexandria,VA. A courageous, dynamic, and visionary leader, he is only the eighth pastor in the church’s 217-year history of worshipping Christ while serving humankind. Currently, Dr. Wesley is part of the first of its kind in the world; the inaugural cohort of only ten (10) exceptional students in the PhD in African American Preaching and Sacred Rhetoric program at the Christian Theological Seminary in Indianapolis, Indiana.

Under Dr. Wesley’s extraordinary leadership, the Alfred Street Baptist Church has grown from 2,800 members to 10,000 members, 60,000 plus monthly online viewers and 80 active ministries with an emphasis on children’s ministries and missions. To accommodate its favor and growth, the church holds four weekend worship services, including one on Saturday night. As a result, Dr. Wesley has launched an initiative to redesign and/or expand the current sanctuary and ministry facility.

Dr. Wesley is regarded as one of the most prolific and prophetic voices of justice and grace in our generation. An empathetic pastor who is not afraid to take on social and political issues, Dr. Wesley led community protest marches against the New York grand jury’s 2014 decision not to indict an NYPD officer whose chokehold led to the death of Eric Gardner. His sermon, “When the Verdict Hurts,” was acknowledged in Time magazine’s July 29, 2013 cover story, “After Trayvon” as one of the best sermons preached in the United States following the “not guilty” verdict in the State of Florida v. George Zimmerman, who fatally shot 17-year-old Trayvon Martin. Three of Dr. Wesley’s sermons, “When the Verdict Hurts,” “A Rizpah Response” (and with the black hoody he donned while preaching this sermon), and “Tell Your Own Story,” have been archived in the faith-based collection of the National Museum of African American History and Culture (NMAAHC) in Washington, DC. With his guidance, Alfred Street Baptist Church became the first and only faith-based institution founding donor of the NMAAHC with a $1 million donation. Dr. Wesley captivated some thought-provoking leaders of our great nation at the 2019 Congressional Black Caucus Foundation 2019 Prayer Breakfast as the Keynote Speaker with the sermonic address of “Let the Church Say Amen”.

Known to challenge the mind and inspire the heart, Dr. Wesley is a much sought after speaker for worship services, conferences, and revivals. His preaching became a favorite of former President and Mrs. Barack Obama who worshipped with their family at Alfred Street Baptist Church on several Easter Sundays. “Faith Forward,” his radio broadcast on the Radio/Urban One network, is one of the most listened to religious Radio broadcasts in the Washington, DC area. His sermons on YouTube have garnered more than 100 million views.

Dr. Wesley is a compassionate and visionary pastor who cares deeply for the members of Alfred Street. At the church’s CAYA (Come As You Are) service, he teaches and preaches to nearly 1,000 young adults, age 22 to 35, from across the Washington, DC, metropolitan area on topics that are real and relevant to today’s young professionals. Dr. Wesley was twice recognized (2013 and 2016) by The Root as one of the top 100 most influential African Americans in the nation. In 2016, he received the NAACP’s Chairman’s Award for his work in social justice at the 47th Annual NAACP Image Awards. In 2017, Dr. Wesley was honored for his work in ministry as an Engaged Clergy persons with the Rainbow PUSH Coalition Trombone Award during the Rainbow Push Coalition’s Annual Media and Telecom Symposium in Washington, DC. In 2019, Dr. Wesley received 89.2% of the vote for The Laurel Wreath Award which is the highest award available to a member of Kappa Alpha Psi Fraternity, Inc. He is the second youngest member of this fraternal organization to receive this award where Arthur Ashe, Jr. is the youngest. Dr. Wesley will be conferred at the 85th Kappa Conclave in Phoenix, Arizona in 2021.

Dr. Wesley is the son of the late Rev. Dr. Alvin and Dr. Helene Wesley and represents the fourth generation of Baptist preachers in his family. He is an avid golfer, moviegoer, spades player, and aspiring chef. He is a Lifetime member of Kappa Alpha Psi Fraternity, Inc., as well as a member of Sigma Pi Phi Boule, the first successful and oldest African American Greek-lettered organization. His sons, Howard-John II (Deuce) and Cooper Reece, are the greatest joys of his life.