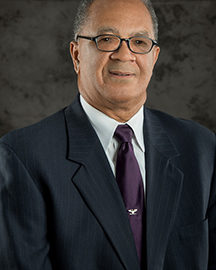 Trustee Berry is a native Texan, born July 10th 1951, Lovelady, TX, as the sixth of seven children, to Sabra D. and Leslie M. Berry. He graduated high school in May, 1969, entered Prairie View A&M University, graduated August 1973, with a bachelor’s of Science degree in Social Work, minor in Psychology. Upon graduation he was commissioned, Second Lieutenant, United States Army.

As an active duty officer, Colonel Berry was assigned to military command and staff positions both in the Continental United States and overseas. He served two tours of duty at the Pentagon as a member of the Army Staff and as a member of the Joint Staff. He was an Army paratrooper with over 50 parachute jumps. During 28 years of service he was awarded the Defense Superior Service Medal, the Legion of Merit, the Defense Meritorious Service Medal, two awards of the Army Meritorious Service Medal, two awards of the Army Commendation Medal, the Army Achievement Medal, the Meritorious Unit Award for support to Operation Desert Storm (the first Iraq War) and the Senior Parachutist Badge.

James resides with his wife, Melodye W. (Walton) Berry of Texarkana, TX, in Springfield, Virginia. They have one daughter, Jamelle Berry Rone, who currently resides in Upper Marlborough, Maryland.

All meetings are virtual until further notice. Click on a date below to register to attend. Meetings are for ASBC MEMBERS ONLY.